You are here: Home / Spill control 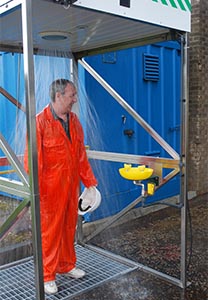 Instead of simply going through a process of self-certification, Empteezy, which recently celebrated its 30th anniversary, has truly gone the extra mile and elected to have its tank shower undergo three independent tests to prove its compliance to international standards.

Empteezy worked with IAPMO R&T, North America’s premium plumbing and mechanical product certification agency to demonstrate that the SE-VTS-1 tank shower, which distributes 75.7 litres of temperature regulated water per minute for 15 minutes met with ANSI standard Z358.1-2014. In addition, Empteezy worked with Applus+ Laboratories to verify the product’s compliance with the ANSI standard.

Applus+ Laboratories also tested the emergency tank shower to verify its compliance with the European Norm (EN) standard for one piece of safety equipment. The product passed the test with flying colours.

Commenting on receiving the accreditations, founding director of Empteezy, Bruce Wishart said: “I am thrilled the tank shower has achieved the ANSI and EN standards, it’s testament to the high-quality products Empteezy is associated with.

“Undertaking the test was entirely voluntary, but we were extremely confident in the tank shower’s credentials and knew it would achieve the pass it deserved”.

Andrew Lawrence, business development manager at Empteezy continued: “The tank shower’s new accreditations put it a class of its own, but also marks the next phase in the company’s business development through being able to showcase it on a more phentermine 37.5 reviews 2011 international stage.

“There is plenty to be excited about within the company over the coming months, so I am excited to see how the rest of 2017 unfolds, we have got off to a flying start!”

Now fully compliant with two international standards (ANSI and EN) and verified by two trusted independent test bodies, the tank shower is set to achieve international recognition within the emergency shower and decontamination industry, and expected to further boost Empteezy’s 18% increase in exports from 2016.

The 2,000 litre water tank capacity provides a gravity fed flow rate that surpasses the standards requirements, even when an optional eyewash is running at the same time, and the heater ensures tepid water.

For more information, and to find out how your business could benefit from expert spill control and containment advice, visit www.empteezy.co.uk.

Products are tailored to meet the requirements of a variety of different working environments including; industrial, commercial, military, marine and educational. Empteezy manufactures in excess of 70% of its products in its own factories, making it well placed to provide expert advice on how to meet UK, EU and International Standards.

Find out more at www.empteezy.co.uk

In 1986 companies all around the world began to realise the importance of environmental protection and safety. It was in this year that DENIOS was created with a mission to offer products that merge workplace safety with the protection of the environment.

What began with simple spill pallets and storage containers has evolved at an impressive speed.  Customer requirements have become more demanding and so have the legal requirements and recommendations. END_OF_DOCUMENT_TOKEN_TO_BE_REPLACED 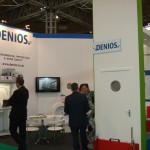 DENIOS UK were extremely satisfied with the results of The Safety & Health Expo once again. The specialist for hazardous materials storage solutions persuaded its visitors with a successful product mix around all areas of environmental protection including sumps, emergency spill kits and absorbents.

The DENIOS stand also saw the introduction of The VARIO – Flow Gap workstation which, thanks to its extraction capacity in comparison to traditional fume cupboards, can achieve significant END_OF_DOCUMENT_TOKEN_TO_BE_REPLACED 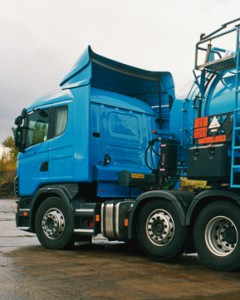 The fact that transport related spills can occur almost anywhere, (In the depot, at the customer’s yard, from loads in transit and not forgetting leaks from the vehicles themselves) makes understanding the risk and preparing for incidents very important.

The Environment Agency recorded over 500 incidents in England and Wales involving transport, cargo, storage and distribution during 2009 with environmental pollution (which is a criminal offence even if it is as a result of accidental release) incidents resulting in many cases. END_OF_DOCUMENT_TOKEN_TO_BE_REPLACED

This site uses cookies: Find out more.
Scroll to top